I’m on my first baby here—I didn’t even have siblings or cousins or anything—so I had no idea that they didn’t really smile for a few weeks. I also didn’t know how much it would explode my heart when they finally did.

I’m working on a longer post about Tom’s 2 month vaccinations, and some very distressing things that some very smart people have said to me about that, but while I noodle away at that I thought of two things.

Apparently (and I say that because my experience involves little more looking stuff up on the internet by doing things like googling “baby smiles”), Tom’s first smiles were probably reflex actions, usually while he was transforming a diaper into something out of a Brian De Palma film (except with poop instead of blood).

But then they started coming more and more and often when I was playing with him. And every time he smiles now—sometimes just from seeing me for the first time in a given day—I feel my heart strapping on running shoes and heading out of my chest to do laps around the house.

It’s probably a good thing too because the things I have seen while changing diapers cannot be unseen.

I won’t be able to post these for too much longer. Renee says I have until his features start to become sort of recognizable in that non-baby way, and then I have to quit posting them on the open internet. After that, I’ll have to stick with random babies in the creative commons who aren’t Tom or weird off-copyright stuff from the 19th century that is sort of tangentially related to my post.

My family talked about this when Grounded Parent invited me to be one of their bloggers. A few baby pictures at first, but after that, we have to consider Tom’s privacy. We don’t want someone who recognizes him to put him in a position where his life is complicated by the fact that his parents are polyamorous atheists living in sin and vice who live with an extra guy in the house in defiance of all that is decent…and stuff. 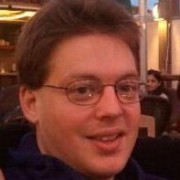 Chris lives with his girlfriend and her husband in a polyamorous family. On Friday Dec 6th, 2013, the married couple had a darling boy. Not "dad" but so much more than "Uncle Chris" he spends much of his time either trying to figure out the boundaries between parent/not-parent or navigating a world ill equipped to deal with non traditional families. When he's not trying to be a grounded parent, he teaches English as a second language and maintains his own blog about writing (chrisbrecheen.blogspot.com).

The First 12 Days of Parenthood

No, Monsanto Isn’t Responsible for Zika, Microcephaly or the Apocalypse.