True story: while I was in college, my parents lived in India. Over the summer I’d go “home” and cat-sit because wow, any excuse to live in India. I spent two weeks chasing my parents’ cat Neko* around the house and rubbing its toes with fungus medicine and frankly, that cat never forgave me. Since then, I’ve been lukewarm on the pet subject.

Anyway, my kids (especially Tiger Lily) really wanted a pet for their collective birthdays, and when I took them to the local reptile show they started asking for a snake. A snake, of all things. Not a chance.

I’m not that afraid of snakes. They’re not slimy or wiggly, they’re totally quiet, they only eat once a week and they hardly ever get sick. Holy crap, they’re the perfect pet for people who aren’t that into pets! Yes kids, you can have a snake!

And that’s how Demon-eyes Buttercup (DB) joined our family. Tiger Lily picked him out during her pink phase, so seriously, we have a pale pink snake with creepy red eyes. But he’s awesome! When it’s time to “pet Snakey” the kids all line up on the couch, sanitize their hands,** and sit oh so quietly so DB will feel safe. When he sheds, everything stops so we can watch because it’s indescribably cool.

Babypants has taken the shed skin to pre-school for show and tell and Tiger Lily once brought our snake itself to show her second grade class. We were worried that kids would be afraid but every single kid wanted to see him up close and run a finger across his scales. Kids are curious creatures and for most of them, snake fear is easy to overcome with confident handlers around.

Our snake, a corn snake, will get pretty long–4 to 5 feet (a bit over 1.5 meters)–but he’ll never be heavy or wide enough to be particularly dangerous, even to  kids. He’s not venomous, and with proper exercise and frequent handling he’s quite calm and used to people. I had a touch of snake phobia when we bought him, but he’s really quite easy to have around. It took some research–none of us knew how to raise a reptile before we got one–but once you have the proper equipment, snakes are a breeze compared to the cats and dogs and birds I grew up with.

To sum up: I own a snake and that makes me a badass. Also, as pets go, snakes are low-maintenance and really fascinating. Most people don’t think of them as a fun pet for kids, but I’m really glad I said yes to this request. It’s been fun for us all.

*If you speak Japanese, you’re laughing right now. Yes, my parents named their cat ‘Cat.’ My dad knows this–he’s fluent in Japanese–but they thought it was funny so ‘Cat’ it is. Was. He died years ago. And got stuck in the freezer. Then cremated. But that’s a whole different post.

**Snakes can catch salmonella bacteria from humans and/or give it to humans, so clean hands keep everyone safe. 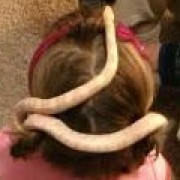 Jo S. is more scared of you than you are of her. She's a stay-at-home mom in the heart of Utah, where three kids is considered a small family. She cooks, crochets, blogs, and runs a small but dedicated skeptical book club.

Everybody Calm The Fuck Down About Your Sunscreen

Book Review: The Opposite of Spoiled

When saying NO to your kids becomes an endurance event

Have you tortured pets for your kids yet?

Is Your Smartphone Addiction Making You Dumb?

This post contains a video, which you can also view here. To support more videos like this, head to patreon.com/rebecca! Transcript: “MRIs reveal smartphone addiction physically changes brains,” cries a headline from Cult of Mac, which picked up the story from the Daily Mail. (Heavy sigh.) (Throat clearing.)  EVERYTHING PHYSICALLY CHANGES YOUR BRAIN. Got it? …