A few weeks ago, one of the other Grounded Parents writers posted an interesting article to the backchannel: 4 Ways Parents Teach Kids that Consent Doesn’t Matter.

Paige Lucas-Stannard points out that there are some very basic and common ways that well-meaning parents teach children that consent doesn’t matter, including continuing tickling after they ask us to stop, contradicting their feelings, and forcing them to give people hugs and kisses. I think Lucas-Stannard has some good points which largely resonated with me; I had been worried myself about the lessons I might have been inadvertently teaching my boys when I kept tickling them after they asked me to stop, and I remember disliking being required to kiss visiting family and friends before my bedtimes when I was a kid.

Of course, I don’t think there’s a direct line from making a child kiss Great Aunt Myrtle to him growing up to be a rapist (or a murderer fueled by resentment over women exercising their right to decline to consent), but these are things to be aware of when dealing with children – children are very perceptive, and our examples regarding the importance of their consent may teach them more than we intend.

So, I know that I should respect their consent, and yet…

A few weeks ago, we took a road trip to visit family, and we decided that it would be a good time to introduce the boys to Harry Potter. D and M had heard about the books from us and from friends at school, so they were a bit curious. We knew that they might be scared, but at 5 and 7, we thought they would be ready. We checked out Harry Potter and the Sorcerer’s Stone on CD from the library and listened to it on the drive.

There were parts of the story that they loved: the dragon, the three-headed guard dog, etc. But only parts.

In addition to D’s sensitivity to peril, he’s also a major rule-follower. That can be great in many ways, of course, because we don’t have to worry about him doing foolish things just to defy us (for now). But it also means that he’s more uncomfortable with kids disobeying an adult than with almost anything else. And if you know the Harry Potter stories, you know that Harry, Ron, and Hermione have a noble but persistent habit of breaking the rules to save the Wizarding World (or even just Neville’s Remembrall).

When this happened, D asked us to stop. No – not “asked”. Begged. Pleaded. Covered his ears with his pillow and yelled (M did the same, but I think he was following his older brother’s lead more than anything else). When this happened, we stopped the CD, explained that things would be OK (since we knew the story), waited for them to calm down, and resumed the story. In the course of the weekend, we finished the whole story.

As we did this, I thought back to Lucas-Stannard’s article:

The second way that we sometimes teach kids that consent doesn’t matter is by contradicting their feelings. I think this is a huge problem because it just comes so naturally. I’ve talked about this before where a kid says “I’m cold” and we say “No you’re not, it’s hot in here” or “I’m hungry”, “No you’re not, you just ate.” “I’m tired”, “No you aren’t, you just got up from your nap.” I think that we, in our minds as parents, we know “What? Why are they saying this? She can’t be hungry, she just ate.”

At first blush, it could be said that we violated this advice; our kids were using words and actions to tell us that they didn’t want to listen to the story, and we continued anyway. However, a closer reading says that we weren’t making this mistake. At no point did we tell them that they weren’t scared, that they weren’t uncomfortable, that their feelings were invalid. We told them that they could trust us that everything would turn out OK, but we accepted and validated their emotions.

Since that weekend, the boys have shown a lot of interest in Harry Potter, asking questions about the upcoming books, talking about reading the first book or two themselves, and begging us to try to find the old Hogwarts Express Lego set that we seem to have misplaced.

Part of parenting is helping your kids push their boundaries and try new things – we did actually know more about the Harry Potter story than them, and we were pretty sure that they would be able to handle the first book when it was all over (and just the first book for now – it’ll be a while before they are ready for the more intense scenes and themes of the later books in the series). In the time since they finished the first story, they’ve shown nothing but enthusiasm.

I don’t want to teach my children that I don’t care about their consent, but in the other direction lies never challenging them and always giving them what they want. Our children will be disappointed at time. They will ask for thing and not get them. They will learn about things they would rather not know existed. They will never be kept in a bubble.

So, I could convince myself that we were doing the correct thing as parents by sharing something scary but safe with them, answering their questions, and validating their feelings.

And yet, I’m still not sure. Maybe we rushed them. Maybe we put our interest in sharing the beloved characters above their needs. Maybe we relied too much on their mixed messages to justify our actions (even while complaining that they didn’t want to listen anymore, they still asked about what had just happened and what might happen). Maybe we’re taking advantage of their resilience, their natural desire to please their parents, and their insatiable interest in fun stories to convince ourselves that it was OK to proceed despite their protestations.

In short, I don’t know for sure, but I think we were OK. Parenting gives us all plenty of opportunities to mess up our kids, and I certainly don’t think that possibly rushing them into exposure to Harry Potter will ever be the worst thing that we do. But I hope to do as well for our kids as I can. While we were listening to the story, I was worried that were we teaching them that we didn’t care about their feelings, but in retrospect I think we were on the right side of the line between challenging them appropriately on one hand and teaching them bad lessons about consent on the other. Either way, I’m glad to have read Lucas-Stannard’s article to help me be more aware of how we model consent in pre-sexual situations. 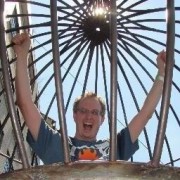 Lance is the father of two boys, a software developer, and an occasional world traveler. Now an active member of the Ethical Society of St. Louis, he grew up in an Evangelical Lutheran home in which he took Christianity very seriously. Fortunately, going to college helped him break through to see that he believed because he thought he was supposed to, not because it makes sense. Now he's glad to be more than just a SIWOTI skeptic. @LMFinney

Stan Lee versus Bill Maher, Who is a Jerk who Hates Kids

You Should See “The Grinch”

Make it: a Tesseract from “A Wrinkle in Time”

Is Your Smartphone Addiction Making You Dumb?

This post contains a video, which you can also view here. To support more videos like this, head to patreon.com/rebecca! Transcript: “MRIs reveal smartphone addiction physically changes brains,” cries a headline from Cult of Mac, which picked up the story from the Daily Mail. (Heavy sigh.) (Throat clearing.)  EVERYTHING PHYSICALLY CHANGES YOUR BRAIN. Got it? …