The genre of children’s movies is one of extremes. On one hand you have the Disney headliner films, big budget productions, sanitized but well written, fantastically animated, with jokes for the guardians sprinkled throughout. On the other, you have the knock-offs, the sequels, and the thinly veiled religious moralizing that no one, your children included, wants to watch. I’ve assembled a few gems you might have missed that will not only be worthy of your children’s screen time, but are certain to keep you entertained too.

Note: The Netflix logos in each section indicate the movie’s streaming availability as of the date of this article and link there.

This French film, based on a 70’s era comic strip, but set in 1910 follows a cynical, intelligent heroine trying to help her sister recover from an accident that has left her in a coma. It reminds me a bit of Amelie, less the adult themes and with a Pterodactyl. Probably better for children 5 and up, the biggest challenge might be the subtitles. There is an English dub, but for houses with readers, this could be a good film to introduce foreign language films.

You might be aware that They Might Be Giants made three children’s education albums. You might even have heard “Why Does the Sun Shine?” because it’s super catchy. But did you know that along with the CD, they released an accompanying DVD with each song from the album uniquely animated for a 45 minute long music video? It transfixes my two year old. We leave the CD in the car, the DVD in the house, and rarely a day goes by where he doesn’t ask for it. My wife used to find some of the songs annoying, but now we have both confessed to humming them throughout the day.

The only musical to make the list, the original Muppet Movie, a cross-country origin story for the troupe, is often overlooked if you didn’t watch it as a child, but holds up well for a modern audience. You might notice its pace feels slower than a new film, as every second wasn’t fought over back then, but I enjoy it. The cameos from then popular, now legendary actors (Steve Martin among them) are fun for parents, and the songs are fun for everyone. Extremely watchable.

Two children meet an old filmmaker in an abandoned theatre to imagine and tell stories  together. As they work out the stories, they create original fairy tales set in a variety of cultural contexts. Animated as shadows over background, this will definitely keep the attention of older children. Some parents might find the themes unsuitable for young children, but I did not.

A storyteller with the ability to make words read aloud become real, Brandon Frasier as protagonist had my wife set against this one before it was in the player. But, whatever your opinion of him, this movie stands on its own. A pro-reading message about the power of words and books, lots of adventure and excitement, very little violence. Even my wife came around eventually.

This Roald Dahl adaptation is what happens when you let Wes Anderson make a children’s movie. The story, a fox who steals from three farmers, causing them to attack him and the other animals in retribution is a little dark, and there is violence throughout. Like most Anderson films, it centers on the story of a father and son, estranged through mutual disappointment that learn to relate and engage as a family.  I honestly don’t know whether to recommend this for younger children who will stay interested in the animal cast, or for older ones who might understand some of the nuances.  You will enjoy it, and hopefully you can keep the kids watching too.

Due to a fast and generally viewed as botched release, this Warner Brother’s film never got the attention it deserved. Set during the Cold War, it’s a classic “child must teach their protector how to love” story, whose core message is about rejecting fear and choosing to be the person you want to be. The ending always gets me teary. You’ve probably heard of it but never seen it. Give it a chance the next time you can.

Probably departing from “Children’s” and more appropriately labeled “Family”, Stardust is adapted from a Neil Gaiman book, and stars an amazing cast. This is a fairytale made the way they should be. A coming of age/ love story featuring pleasantly original concepts for a fantasy film, (cross dressing lightning pirates) it manages to retain a classical, heroic feeling. This movie is the most violent and sexual in the list, and probably should be reserved for middle school ages or above, but will quickly be a favorite. You should own this movie.

This entire list could be the films of Hayao Miyazaki’s Studio Ghibli, (Ponyo, Nausicaä, Spirited Away, KiKi’s Delivery Service, Howl’s Moving Castle, Princess Mononoke) but this entry will have to represent for the others. Totoro is the story of two sisters who move with their father out into the country to be nearer to their mother, recovering in a nearby hospital. The film defies convention, in that there is no “bad guy” or conflict driving the story, just the experiences of the two girls meeting the magical creatures, Totoro and Catbus. I’ve never met a person who didn’t like Totoro.

Perhaps my all-time favorite children’s film, this complex story follows many characters through the story of a tragic accident, grieving, and ultimately, healing with a backdrop of soup. Characters variously become heroes or villains as they are emotionally wounded or redeemed, make mistakes and ask for forgiveness, showing a more interesting concept of evil than any other movie in its genre. It could have trouble holding the attention of very young children.

All image rights belong to their respective owners. 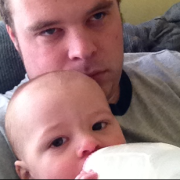 Erich Bacher is a father of two boys and an IT professional. He owns copies of Transformers: The Movie (1986) on DVD and VHS, frequently misspells certain words, and has an extensive collection of ideas.