A few years ago, I took my son to COSI for a day of fun. COSI is a science center in Columbus, and almost every Ohio person under the age of 35 can tell you all about their trip there when they were young. Most of the memories involve the tadpoles they gave out (mine had two heads and died within hours of getting home). Today, though, COSI is much more scientific and streamlined. The state of Ohio has pumped millions into the facility, and the results are pretty awesome.

After the 5 or 6 hours we stood in line to buy our tickets, we were ready to be turned loose into the wonders of COSI. SC was excited, and I was… oh, I don’t know. I had some trepidation about the whole thing. Science is not my forte, but I held out hope for cool things that SC would love. 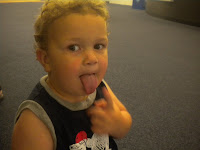 (Plus, maybe he could be a scientist if that football thing didn’t work out. Or an ice cream taste-tester.)

The first room we went into was Space, and it was obviously for slightly older kids. Still, we walked SC through. SC wanted to try his hand at a viewing exhibit that an older kid was using. He moved up to use it too, and the kid, involved with what he was doing, flung his hand out to push SC back.

Rage. It built up inside me and surprised me. I looked around to see if there was some mind control exhibit affecting me. The kid had done something idiotic, to be sure, but SC didn’t get hit. It was not a big deal.

Nope. I was just pissed.

The theme continued throughout the day. Upstairs, in the toddler play area (which covered almost an entire floor and was amazing), SC reached for some crutches that were lying on a bench in the “Emergency Room” play area. A girl of about 5, with bouncy blond ringlets, stuck her little nose up in the air and snatched them from him. “I was JUST going to play with those!” she said. “They’re MINE.” I glared at her. “Come on, SC,” I said. “Someone’s mother needs to watch her snotty little child.” I looked around to see if the mother noticed, but there was no mother. SC and I moved to another exhibit, but I was fuming. 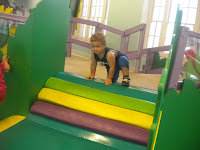 Later, at a geology exhibit, there were posts that shot water. You could stand behind them and aim the water. There was one open, so SC and I walked up to it. When we were about 6 inches from it, a 12-year old boy jumped in front of us and started firing. I got my Teacher Voice on. “Excuse me, but you knew my son was about to use that. You need to let him have his turn.” The boy turned and gave me an evil look, but darted away. SC played with the post and then let the kid behind him in line use it.

I can feel it as I’m writing this. I can feel the anger churning. I’m not an angry person by any means, but when it comes to SC, I would stand up to anyone for him. I know he needs to learn to fend for himself, and I never want him to be the kid whose mommy is his bodyguard, but come on. A 12 year old kid jumping in front of him? That kid has 10 years on SC. He needs to learn some manners

As angry as I am with these bratty kids, I’m more angry with their parents. My son will hit or shove or not take his turn from time to time, but I’m watching him. I’m there to step in and say, “SC, it’s not your turn yet. These other kids were here first.” I am a responsible parent. Where were the parents when these kids were being bossy? We were at a science center where families go. I close my eyes to picture the scene, to see if I overlooked a mom around the corner tending to another kid or something, but there were none. Of course these kids are going to be rude or bossy – they don’t have a parent standing close by to guide them.

Still, this knowledge does nothing to help with my rage. There must be something biological that wells up in mothers when they see their child being denigrated or ignored. The non-assertive part of me dies when I see someone mistreating my child, and I become Super Mama. It’s hard for me to view them as a child when I’m in the moment. Instead, they become my foe, and I become condescending. Something inside of me snaps.

Now I can understand celebrities’ pleas for reporters to leave their children alone. I empathize with these parents in the spotlight. When I am a famous writer, you can be sure I’ll do the same.

Anyway, we got out of COSI without me being arrested. SC had a good time,  and I was happy that I wasn’t asked to do any math formulas. Also, I learned how to do a testicular exam for cancer. So, all in all, still not a bad day.

Photos by me. All rights reserved.

Tori is a high school English teacher from Ohio (insert cheerleader kick here)! She is emphatic! She is skeptical! She is nifty! Her boyfriend says that they can get a potbellied pig someday and name him Bacon. She has a little boy whose pseudonym is SC, although he has recently asked that his name be changed to Henry. When asked for a comment to add on this bio, he asked, "Why do we sound like a bad '70's cop show?" So there's that.