When the news broke that All Pro running back Adrian Peterson had been indicted by a Montgomery County grand jury and charged with one count of injury to a child for an incident in May where he administered a “whooping” to his 4 year old son that involved a switch or tree branch and resulted in cuts and bruises to the child’s back legs and buttocks (I’ll spare you the picture, it’s on the web if you wish to find it,) I knew that I would want to write about the incident and its fallout for Grounded Parents. But I also knew that there would be people with much more expertise and talent than little old me would be writing about the incident in the days ahead and that maybe the best thing I could do as a blogger would be to sort through that output and share with you folks the the best of what I had found. I should first admit my own bias’. I’ve been a fan of Pro Football for as long as I can remember, and I’m 45 so that goes back to the era of Electric Football, Kenny Anderson and Bengals uniforms that didn’t have stripes on them. I’ve even been a Vikings fan because the late 80’s defensive line from Minnesota formed the backbone of my hugely successful Strat-o-matic Football teams in ‘88 and ‘89. 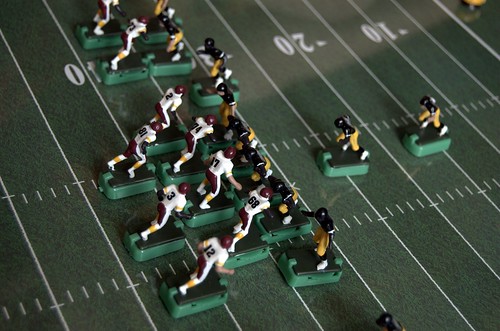 The charges against Peterson led to him being benched by the team for last Sunday’s embarrassing loss to the New England Patriots, although a team starting Matt Cassell and a cast of “who is that” at receiver can hardly blame Purple Jesus’ absence for everything. The team had hoped to have Peterson back in the  huddle in Week Three (everything involving the NFL season get’s capital letters) but public outcry and a good deal of blowback from the already embarrassing Ray Rice scandal led to Peterson being placed on the exempt/commissioner’s list, a kind of limbo wherein he will be barred from all team activities until such a time as the Commissioner’s Office deems the case settled to Roger “Commisar” Goodell’s satisfaction. Or whatever Goodell thinks will best protect his $44 Million Dollar a Year Paycheck. Barring some miraculous exculpatory evidence surfacing this likely spells the end of Peterson’s tenure in Minnesota, if not his entire career.

Mike Tanier, formerly of Football Outsiders and Sports on Earth, now doing the best football writing on the internet at Bleacher Report penned ‘Violence is Violence’, Adrian Peterson and the Science of Spanking in which Mr Tanier, also an educator, pretty much demolishes any justification for corporal punishment as it is administered in the USA.

Four-year-old brains are developing rapidly, which makes that period of life so wonderful yet so dangerous. A preschooler’s cognitive development can be slowed. The child can acquire aggressive impulses. The bond between child and caregiver can be damaged. A preschooler can develop depression, anxiety or even post-traumatic stress disorder.

There is one major, common, scientifically verified cause of all of those problems: corporal punishment, from a spank to the buttocks to a “whoopin‘” with a blunt object.

The important corporal punishment debate is not between Jim Rome and Charles Barkley, or between you and that loudmouth on Twitter, or even between Peterson and the law. It’s a debate between overwhelming, established scientific evidence and parents—hundreds of thousands of them in America—who actively disregard that evidence and choose to do something dangerous to our children.

There are sound bites, and then there is science.

You can hear the Charles Barkely take ( Every black parent in the south is going to be in jail under those circumstances.) here. I also recommend Cris Carter’s  impassioned response to the news as well.

Are you back? Good. 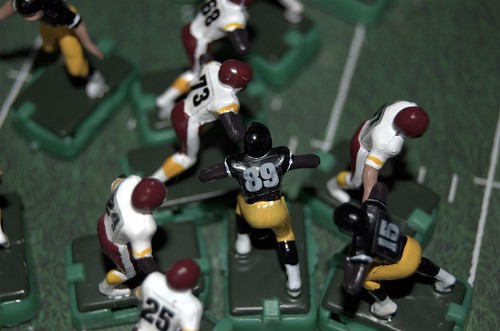 Another great essay on the Peterson Case can be found at Salon where contributing writer Brittany Cooper wrote The Racial Parenting Divide: What Adrian Peterson reveals about black vs. white child rearing. Ms. Cooper does an excellent job of condemning Peterson’s actions while at the same time doing a much better job than the Round Mound of Rebound of fitting Peterson’s treatment of his son into the reality experienced by black parents dealing with an America that still sees the bodies of young black men and women as disposable.

And I began to understand, quite starkly, in that moment, the freedom that white children have to see the world as a place that they can explore, a place in which they can sit, or stand, or climb at will. The world, they are learning, is theirs for the taking.

Then I thought about what it means to parent a black child, any black child, in similar circumstances. I think of the swiftness with which a black mother would have ushered her child into a seat, with firm looks and not a little a scolding, the implied if unspoken threat of either a grounding or a whupping, if her request were not immediately met with compliance. So much is wrapped up in that moment: a desire to demonstrate that one’s black child is well-behaved, non-threatening, well-trained. Disciplined. I think of the centuries of imminent fear that have shaped and contoured African-American working-class cultures of discipline, the sternness of our mothers’ and grandmothers’ looks, the firmness of the belts and switches applied to our hind parts, the rhythmic, loving, painful scoldings accompanying spankings as if the messages could be imprinted on our bodies with a sure and swift and repetitive show of force.

White children in general are raised to be Columbus, to “discover” the world anew and then to manipulate and order the universe to their own liking. If we take away the colonizing impulse in living this way, I think it would be amazing to have the luxury of raising black children who also view the world as a space of their own making, a space to be explored, a space to build anew. A space where occasionally, simply because you live there, you can opt to walk in the middle of the street instead of being confined to the sidewalk, much as you might sling your leg across the arm of a chair in your own home, because it is home.

But for so many black children, these kinds of frivolous choices will get you killed or locked up. For black children, finding disciplinary methods that instill a healthy sense of fear in a world that is exceptionally violent toward them is a hard balance to find.

The thing is, though: Beating, whupping or spanking your children will not protect them from state violence.  It won’t keep them out of prison. Ruling homes and children with an iron fist will not restore the dignity and respect that the outside world fails to confer on adult black people.

This analysis really hits home to me because I’m a fairly shameless advocate of the Free Range Kids philosophy and it had not especially occurred to me that the kind of freedom I encourage in my lily white kids could get them in serious or even deadly trouble if they were African American or Latino children. We white americans need to do more to deal with the white supremacist world these families are forced to live in if we want to have the moral authority to lecture or even legislate how they discipline their children.

My opinions on spanking are on the record (I’m  against it), detailed here in the My Parents Spanked Me As A Child edition of the Internet Meme Demolition Derby. And I’m glad that the public outcry seems to have pushed this issue onto the front pages, for at least a news cycle or two. Parents in the US are badly out of sync with scientific consensus on this issue and I hope that we are able to have a national discussion about bringing America closer to the rest of the civilized world on this issue.

And I hope Adrian Peterson learns his lesson and pays his dues. He could easily become the face of changing our national attitude about “whupping” if he has the courage to admit he was wrong. I hope he can can back on the football field someday while he is still young enough and talented enough to make magic happen on Sundays. I hope the NFL is able to reform the way that it deals with players, coaches and owners who do heinous things, something better than the current “Roger Goodell as benevolent dictator” approach. Of course Mike Tanier has some interesting ideas on that as well.

Why Don’t You Let Your Kid Cut All Its Hair Off?

What is Fair? How Young Children See Justice