I anticipated any number of problems arising from transitioning my kid back to public school – the early mornings, the piles of homework, getting called to the office because she said fuck in class (again).

What! Me? The radical steel-buckle progressive?  The parent who let her nine year old read Kafka?  (In the Graphic Novel version, and I don’t know if let is actually the best verb, since she was reading it before I noticed, but still.) (“Mom?” the little voice piped up behind me, as she was halfway through The Penal Colony. “What is this machine doing to this guy?”)

The first part of the year was fine.  It’s AP English.  They read The Odyssey.  They read Antigone in the Fitzgerald translation.  This is wonderful.  This is lovely!  They read Shirley Jackson’s “The Lottery,” and then Stephen Vincent Benet’s “By the Waters of Babylon,” which – while it’s not Antigone – is not a terrible choice for a tenth grade classroom.  I’m still with him!

But then my kid comes home.  “I’ve got terrible news for you, Ma.” 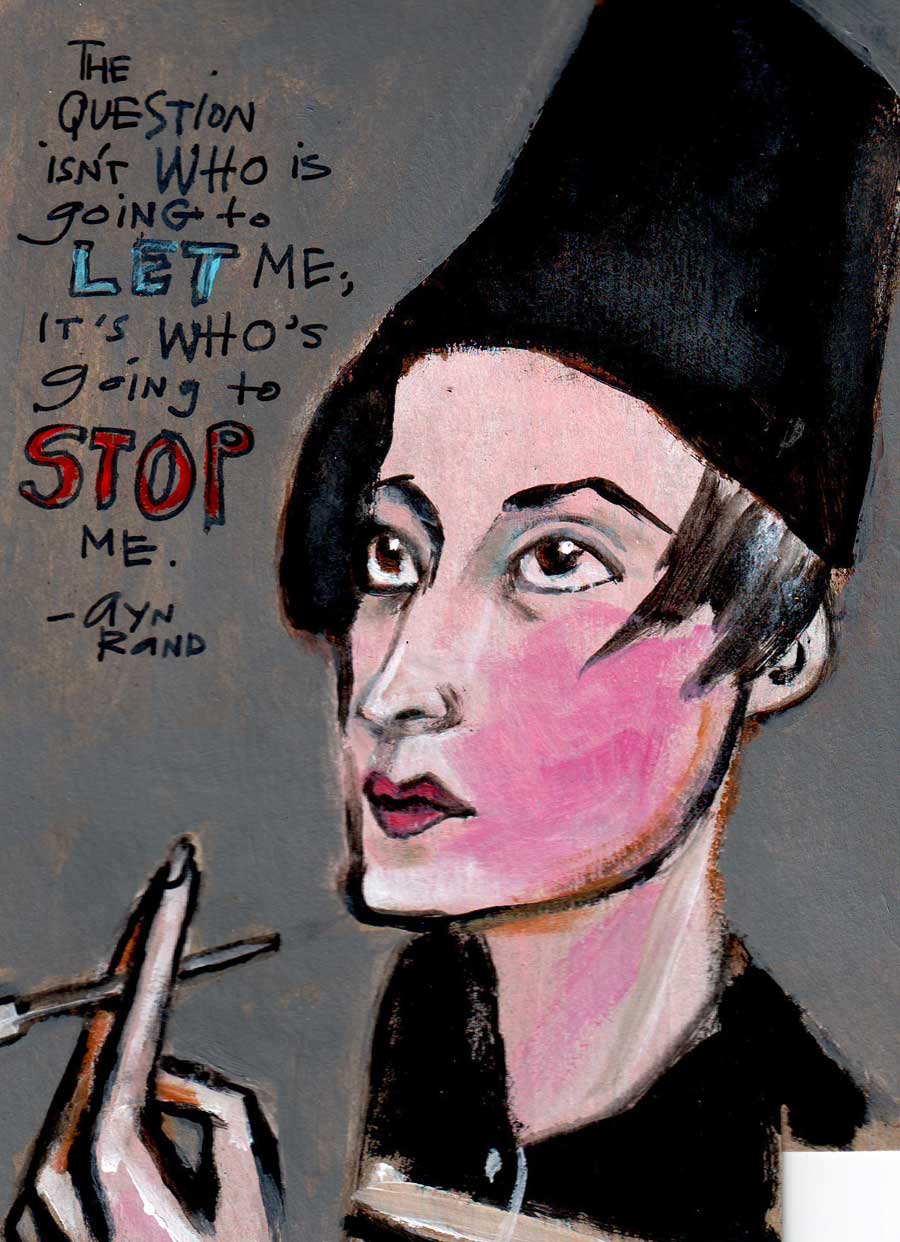 “What?” I look up from the essay I’m grading.

I did my best to remain calm.  She was bringing the book home to read – it’s relatively short, if you’re not familiar with the works of the Evil One – and I read it, on the off chance that I might be mistaken, that Ayn Rand might (in fact) have something of value to say, or might be a misunderstood genius.

Yeah, no.  My longer review is here, if you are interested, but shorter Anthem: Community Bad, Self Good (and Self=Man, by the way.  Women are made to kneel to men).

Plus a nice dose of Eugenics, despite all Rand’s claims to the contrary, since anyone who is not physically and mentally superior, as Rand is defining superior, has no right to survive in her world.

So, that was my first misgiving.  But since a little notice stuck to the inside cover of the paperback informed us that these books had been donated by a Libertarian Vitamin King, I decided maybe the English teacher (who seems very smart and savvy) had no choice but to use them.  The way he taught it, and the assignments he gave, kind of reinforced this.

Then came the next assignment: The Merchant of Venice.

Now part of AP English is reading a Shakespeare play.  That’s one of the requirements.  But – this play?

Last night, reading the critical essay that was assigned to accompany it (written in 1899, ffs) my kid was sobbing in her room.

“Do you think he knows I’m Jewish?” she asked me, talking about her teacher.  “Do you think he even knows that Shylock is an insult?  That people use it to insult Jews?”

“I don’t know, baby.  This is such a Christian enclave.”

“Everything in the play.  Jew this and Jew that.  It just hurts me.”

“You can say that.  You can raise your hand in class and say that.”

“I’m afraid I’ll start crying.”  She was crying as she said it.  “And Jessica is worse.  She’s only good because she’s converting to Christianity. I hate this play!”

“Do you want Dad to come talk to your teacher?  You know he will.”

Dr. Skull already wanted to when he found out what they were reading.  He couldn’t believe they were reading Merchant of Venice, his point being that there are 37 different Shakespeare plays that could be used, so why use this one, which is has at its heart anti-Semitism. He only didn’t go in and talk to the teacher because I stopped him.  I was against intervention, not wanting to be those parents, and also the kid was really against it – she prefers to handle her own problems.

It is, by the way, the father-daughter relationship in this play that hurts my child the most.  None of the students in her class, she points out, even know any Jews.  This Shylock is the only Jew they are going to encounter.  His treatment of Jessica is how they will believe Jewish fathers treat their daughters.  “That’s not what my father is,” she told me, crying in my arms.  “My father doesn’t even care about money.  My dad loves me!”

“Of course he does,” I said helplessly.

I started this post with the thinking that I would give some advice for how to deal with the issue of how to handle problematic reading assignments given to your child in school.  But, in fact, I don’t have all that much advice to give you.

Here’s the advice I do have so far:

(Image Credits: Painting by Thomas Gray of Shylock and Jessica, 1868; A Poster of Ayn Rand)

Raised in New Orleans, Kelly Jennings is a member and co-founder of the Boston Mountain Writers Group. She has published short fiction in Strange Horizons and The Future Fire, as well as in the recent feminist SF anthology The Other Half of The Sky. Her first novel, Broken Slate, was published by Crossed Genres. She blogs at delagar.