Hello there! I hope everyone in the Northern Hemisphere had a happy Summer vacation. Summer is still kind of full time work for this stay at home parent, which is why the Derby has been quiet for a few months. But the kids are back in school so lets sweep the cobwebs from the corners, rake out some fresh dirt onto the arena floor and see what the Internet can provide for our amusement. I’m sure there’s an issue of deep significance, a weighty issue being debated across the World Wide Web through the fine art of Internet Meme badinage… I’ll just open my browser, click on a few “hyperlinks” and I’m sure we’ll find something we can really sink our teeth into…

“When you do this” (Image of a man with his long hair tied up into a bun.)
“This is what I see” (Image of a man, not the same man, with crudely photoshopped dress and pigtails with tied up with pretty yellow ribbons, kinda looks like he scalped Punky Brewster and is wearing her skin like a suit?  I am told by The Internet that it is Jim Carrey playing the character of Vera De Milo on In Living Color* (see correction below) , which is unfunny transphobic crap btw.)

The hairstyle in question here is what we in the year of Our Lord Voldemort Two Thousand and Sixteen have decided to call a “man bun” . Now in a healthy, mature culture that is fully secure and comfortable with the endless variety of human expression we would just call it a bun. But we don’t live in that culture. We live in this culture…

So lets start unpacking. The hairstyle in question, the one we call a “man bun” has actually been around for CENTURIES!  Before we decided it was a sign of the impending metrosexual apocalypse it was called a top-knot and everyone from Maori fighters, Samurai warriors to fucking Thor have utilized some form of the hairstyle to keep their flowing locks out of their eyes while they kicked somebodies ass. Yet today this perfectly utilitarian hair contrivance has been declared a danger to our nations precious bodily fluids.  Here’s the Urban Dictionary definition…

Even humorists I really respect, like The Oatmeal have jumped on the hating man bun bandwagon. 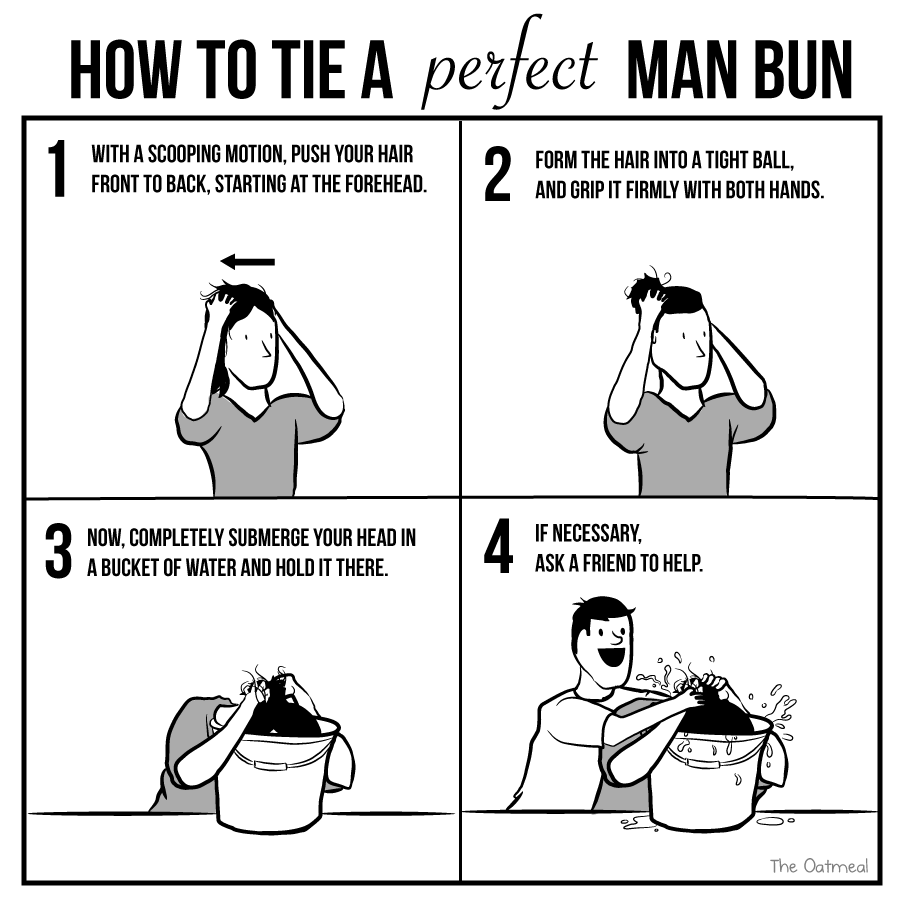 You see, the problem is that we hate women and gay people and trans people.

When you share this meme it means you think that a dudes hairstyle makes him look like a woman, or a gay man, or a trans woman.

And we hate those people. Comparing a normal, cis straight man to a woman is the worst insult imaginable.

Boy oh boy do we hate them. We hate them so much that doing something coded as feminine by our culture if you are a man is not only a bad look on you, it endangers

the very fabric of the nation. This has lead to the emergence of entire product lines (like the ass wipes above) marketed so as to protect fragile masculinity. We have extra manly soaps, in all shapes and sizes, even grenade shaped! We have special Man Candles at the candle store.  For decades Secret Deodorant told us that their product was “Strong enough for a man, but made for a woman”.  GQ assures us that it is now OK for cis straight dudes to drink rosé wine without their dicks falling off (or running away with some other guys dick.) You can drink a Mangria, just ask former co-host of The Man Show, Adam Corrolla.

“Combining red wine and the smooth sweet flavors and aromas of plum, cherry, blackberry, orange and citrus, mangria tastes delicious and is great for any occasion from appetizers, to backyard barbecues, to midnight cocktails”

Plus it won’t make you gay! We guarantee!

We couldn’t even leave the basis of the Homer Simpson diet alone… instead you should break your fast with a bronut.

So what you say? So what if one mans choice of hairstyle makes you think of a shitty transphobic comedy routine from 30 years ago? What’s the harm?

The harm is that men in general seem to take this shit really fucking seriously. These companies aren’t doing this for laughs. They know that pretty much the worst thing you can do to a cis male is imply that he’s unmanly, that he’s acting in ways we code as feminine, and they are capitalizing on that fragility. And while we can all have a chuckle at the next ridiculously gendered product or style that comes down the line (Q-tips? seriously?), me need to remember that this is part of the deeply rooted sexism in our culture. By gendering products and styles, rewarding and protecting the masculine whilst denigrating and in many cases coopting the feminine, we reinforce the idea that women are “less than” men. It’s part of the framework that supports broader and more serious misogyny and homophobia or transphobia. The kind that makes the front page because someone got hurt.

You think that shitty Jim Carrey routine is funny? Did you know that in 49 states it is still legal to present Trans or Gay Panic as a defense in trial for assault or even murder? Fuckers out there will fucking kill you for threatening their masculinity and the legal system hints that they might be justified. Still funny?

You think a top knot makes a dude look funny because it makes him look gay and that’s funny? Ask the victims of Omar Mateen, a serial domestic abuser who walked into a gay nightclub earlier this year and shot 102 people, killing 49. I’m sure the survivors will laugh right with you.

Ask the family of Mathew Sheppard how funny your joke is.

Fuck… that got bleak quick. To sum up, we’re all awful and we should endeavor to cut that shit out… can I go back on vacation?

*Correction, The original version of this post attributed Mr. Carrey’s unfunny transphobic performance to Mad TV, rather than In Living Color . Hat tip to Hanoumatoi.