I thought long and hard about what I wanted to say in my first blog post. After all, it’s my introduction to the world. In case you’ve never introduced yourself to the world, it’s a lot of pressure. That whole first impressions thing. I spent many long hours, walking my dog and ignoring my kid, trying to figure out exactly how I wanted to introduce myself. I could talk about so many deep and meaningful things. Things that might make readers nod sagely or widen their eyes in disbelief. Things that would make them clamp their sweaty palms over their mouths to stifle a guffaw. The possibilities were endless!

Here’s a thing about me, though. When I’m trying to think, I find myself embracing the most awful tasks in order to find guilt-free time in which to (avoid) come to a decision. I can only walk the dog for so long before he starts limping and whimpering to go back home for a drink of water.

After doing a bunch of laundry, I still didn’t know what I wanted to write about, so I decided to clean the master bathroom. Maybe scrubbing soap scum would jog my creativity.

I armed myself with baking soda, vinegar, and essential oils and headed into the closet-sized room.

I got down on my knees, sprinkled a bunch of baking soda in the shower and started scrubbing. We recently moved into this house and I had no idea how often the people before me cleaned things out, so I popped off the drain cover and peered down into the slimy hole. It didn’t look promising. Or maybe it did if you happen to be someone who embraces disgusting tasks in order to (get out of writing ) think.

The shade of red that greeted me was horrific. It reminded me of what a mouth must look like if a deranged dentist yanked out someone’s teeth with a rusty trowel.  Without anesthesia. A shiver ran through me as I contemplated the logistics of prying teeth out of a struggling victim who desires to keep all his teeth. But, ever the (procrastinator) diligent homemaker, I let out a deep breath and dumped about a cup of baking soda down the gaping maw. I followed that with a few drops of orange essential oil and I slowly added the vinegar. The bubbling was immediate and strong. A god-awful pink sludge oozed out of the hole and the bottom of the shower started to fill with gross gross-ness.  It bubbled and filled and filled and bubbled…But it didn’t drain.

Oh dear god, what did I do? I’d need to find something to stir the sludge with. Maybe that would break up the clog and allow the goop to drain. I stood up a bit too fast, fought off a dizzy spell, and went in search of a wire coat hanger. We don’t actually own wire hangers, but the house had about a dozen or so when we moved in. Maybe they had escaped the recycle bin.

Luck was with me and I found one hanging in my office closet. I grabbed it and took it back to the bathroom. The bubbling had stopped but the goo still wasn’t draining. My eyes darted from goo to vinegar. I decided to go ahead and add more vinegar to the drain before sticking the hanger down there. Maybe more liquid would unclog the clog.

My vinegar container holds just under 1.5 gallons. I get it on the cheap at Costco and I use it for everything. This particular container had about half a gallon left, and the bottle made a deep glugging noise as I poured its contents into the drain. More bubbles rose and popped, and the goo went from pink to gray to almost black. And dear lord, the smell! It burned, it burned! The smell freaking burned! Like farts and rotten eggs and shit and death. Tears pricked my eyes, but I’m way too stubborn to let a smell make me cry.

The hanger waited in my hand, like some sort of awesome, hooked sword that would save the day. But first, I’d need something to stifle my gag reflex. I took my trusty weapon to the kitchen where I found the open bottle of crappy wine from the night before. Right next to the bottle was my wine glass, also from the previous night.  A classy mom would have opened a fresh bottle and gotten a clean glass, but I never claimed to have class. My thought process went something like this:

Death is bubbling up from my shower drain. Literally. I saw the freaking scythe. If death is gonna take me, he’ll take me whether or not the wine and glass are fresh.

I pulled the fancy stainless steel stopper (I don’t think I ever sent a thank-you card for those stoppers…what was that? Four years ago? Eight? Oh well. I bet whoever gave them to us has forgotten we forgot to send a thank-you card) and poured it right into the dirty glass. I carried it and my trusty sword back to the bathroom, where the smell hit me in the face like a million dirty diapers left rotting in the sun. I swallowed the entire glass of wine in two gulps and set the twice-dirty glass on the counter like a cowboy slams his mug of sarsaparilla on the bar.

l stuck the hanger down the drain and swirled it around a bit, but the hooked end wasn’t doing the job. I’d have to figure out how to straighten it out. My hands were covered in pink and grey funk and the needle nose pliers were who knows where. Probably still buried in a box. I picked up the nasty rag I was using to scrub the floor of the shower and unhooked the hanger. I could tell right away that it wouldn’t be long enough. Well, a hanger is really just one long piece of wire that’s twisted into a funky shape. I had managed to unhook the hook, maybe I could untwist the twist. Slimy rag in hand, I set to transforming my trusty weapon into a misshapen, vaguely straight, poker thingy.

The quickly guzzled stale wine was getting to my head, and my imagination was running, running, running. No longer was I an almost forty-year-old mother avoiding writing a blog post by unclogging a disgusting drain in a rental house. Nope. Now I was a hero. A she-knight. I was the castle’s only hope against an evil drain snake that was taking over the kingdom. I raised my sword above my head and plunge-twisted it right into the gaping mouth of the horrible beast. I can’t be certain, but I think I uttered the phrase “Die, you evil bastard!” under my breath.

It didn’t want to die. I felt something deep inside give, and another blast of rotten egg farts hit me in the face. I reeled backward and sucked in a few breaths of the sweet air outside of the bathroom.

With tears still swimming in my eyes, I took a deep breath and dashed back into the toxic bathroom for my wine glass. I caught my reflection in the mirror and I noticed what seemed to be a little pimple or something in the corner of my mouth. I raised my hand to touch my face but realized I was covered in baking soda and death, so I brought my hand down without touching.

Back in the kitchen, I topped off my wine, sipped down half of it, and topped it off again, thereby killing what was left of the bottle. I eyed the crimson liquid in the glass and realized it was just a tad too full to carry back to the bathroom. Better just sip down a bit so it wouldn’t spill. Really, that was the only responsible thing to do. Looking back, I think drinking a glass of water would have been a bit more responsible. But you know, that whole hindsight is 20/20 thing.

The smell in the the bathroom had mostly dissipated by the time I made it back. I took one more small sip (gulp) of wine and set the nearly empty glass on the counter. The drain seemed to have stopped bubbling, which I took as good news. I picked up my weapon and jammed it down into the black pit of doom. I swirled and scraped it around and pulled out clump after clump…after clump of hair. Someone else’s hair. Someone’s long and tangled and slimy hair.

The nausea came on fast and my imagination was doing triple time. As a clump of hair dangled from the misshapen hanger, I was realized that it wasn’t human hair at all. No. Surely there couldn’t be so much hair down a drain. Somehow, a mouse had found its way down there and gotten stuck. That was the only thing that made any sense at all. That would explain the smell and the slime…Oh. My. God. I had been mutilating a mouse corpse and now I had to fish it out, piece by putrid piece. Half drunk. With a damned crooked hanger!

I grabbed the bathroom trash and flung the mouse remains into the can before fishing for more.  Two, three, four clumps later, I looked more closely and saw that I wasn’t pulling out a mouse. It really was nothing but bunch of slimy hair. The relief was so intense, I could almost taste it.

When I got all I could stand getting, I ran the shower to make sure the drain would, well, drain. Then I scrubbed down the floor and walls of the shower, rinsed everything again, put a few drops of orange and tea tree oils down the hole, replaced the cover and inhaled deeply. The shower was sparkling and the whole bathroom smelled clean and fresh. I squatted there a moment, taking pride in my June Cleaver-like domestic prowess.

I tied the the trash bag and went to the sink to wash my hands. My reflection revealed that I had a second little pimple type thingy on the opposite corner of my mouth. Weird.

I leaned in for a closer look and laughed at my reflection. I didn’t have zits or weird blemishes at all! All I had was a red wine mustache.

And a decent introduction to the world. 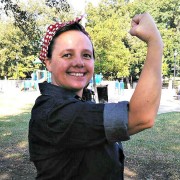 Everybody Calm The Fuck Down About Your Sunscreen

Book Review: The Opposite of Spoiled

When saying NO to your kids becomes an endurance event

Have you tortured pets for your kids yet?