As everyone seems to think Chanukah is Jewish Christmas, I figured I’d contribute to the confusion by writing about Chanukah a month late. I also thought it would be really nice of me to provide “but you’re such a hypocrite” fodder for those of you reading who will want to argue with me in later posts (I’m so considerate).

A little background, I grew up in a religious household, but my parents didn’t like organized religion, and other than a brief stint where I thought maybe the Egyptian Gods were real, I never believed at all. (Even though I suspended my disbelief enough to believe in Santa until 3rd grade; imagine the confusion of the other kids when I told them I believed in Santa, but not Jesus). My husband is also an atheist, the son of a Humanistic Jew and an agnostic. The first Passover (Pesach) I spent with them, I was horrified that all these supposed atheists were taking part in what seemed like a very religious event. I thought I was somehow cheating on my principles. I didn’t understand that to many, Judaism is just as much or more about cultural heritage than it is about actual belief. More about this in a bit.

This is the first holiday season I’ve spent in a few various parenting groups where I’m very comfortable. Everyone knows everyone else’s beliefs, and we’re all comfortable enough to ask questions without worrying about the other person getting angry and blocking us (a very special shout-out to my very Christian friend Terra, who puts up with a lot). When I started posting about Chanukah things, and answering the Christian or Atheist posters questions about all things Jewish, people were really confused. “But Anne, you’re an atheist, did you convert?” and my favorite that really made me think “You told us you’d be angry if people tried to take Aria to church or teach her about Jesus, but you don’t mind going her going to Temple or hearing Jewish things from your in-laws?” I immediately had flashbacks to my horror of having to sit through a religious pre-meal ceremony (Passover), and thought “what have I done?!?!”

But after the initial horror, I thought a little more about it, and I think on a hypocrite scale of 1-10, I’d only rate myself a 1 or a 2, with full admission there may be some cognitive dissonance going on here. Why? It has everything to do with my experiences with Judaism and Christianity.

Maybe they exist, but I’ve NEVER been to a Christian service, where anyone said “this is silly and couldn’t really happen, but isn’t it a great lesson about love/community/whatever.” Never. And I’ve never heard “this is a good lesson, because it helps you be better to your fellow man.” I mean, that’s always my tolerant Christian lesson, my stock phrase is “Jesus was probably real, a groovy guy who did groovy things and cared about everyone”, but I’ve never actually heard that message in a church. I’ve heard about a God who punishes people for not following weird rules, and will send all the non-believers in him (you know, most of the planet) to Hell. That is why I don’t want Aria to go to any Christian services, and that’s why I don’t want anyone telling her all about their loving God. We live in a predominantly Christian society (note: this is different than a Christian nation), she’ll hear enough about Christianity without me needing to make any effort to introduce her to it. I’m going to have to spend enough time making sure she doesn’t think she or her parents are going to hell. Not my idea of a good time.

By contrast, I’ve gone to some wonderful Jewish services where there is no threat of eternal punishment (no Hell in Judaism), and the rabbi was totally cool with the fact that when he called up people in groups to read from the Torah (believer, doubters and non-believers) the non-believers were the largest group, followed closely by the doubters. These were all high holiday services, and just like a Christian church, there were way more people there for their 2 or 3 visits a year than a normal service. The difference is many of these people were never believers, or at least never super into their religion. They are, however, into their culture, and think attending these services is an important part of preserving their cultural heritage.

I’m not delusional, I know Orthodox Judaism has it’s own set of problems, just like Christianity. The big difference I see between Judaism and Christianity is that there is a middle ground of Judaism that is preserving history and sharing fun stories, without the threats mentioned above. I know my daughter will learn all about Jesus from her friends in school, and all I can do is damage control, but I’ll make sure she participates in her cultural heritage, comfortable, despite my initial fears, that she can do so without religion. And she was just so darn cute trying to sing along while daddy was lighting the Chanukah candles. 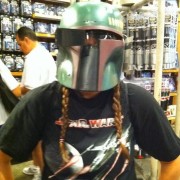 4th of July is Cancelled, Maybe it Should Stay That Way